I loved the first game,  and will no doubt love this sequel, but my cynic’s radar tends to beep uncontrollably when devs start telling us that their newest game ‘maxes out’ the hardware on the console they’re releasing on.  It seems entirely probable that the Naughty Dog team have wrung new levels of performance out of the PS3 hardware in the years since the first game launched with the system – you would hope that a two or three year dev cycle doesn’t merely result in a slight upgrade – but surely it’s better to just admit that the game is going to offer the best performance, audio and graphical fidelity and gameplay advances available at the minute.

If Sony really do regard the PS3 as a ten year system, they’re not going to be that chuffed at the notion that their system is already all tapped out, wouldn’t you say?

I’m expecting more of this level of hype and bluster come the inevitable release of “Killzone 3” – Indeed, one of the gaming news sites that I frequent is already positing that “KZ3” will figure characters with the kind of photorealistic features due to be seen in next year’s “Heavy Rain”.

Film of the year? 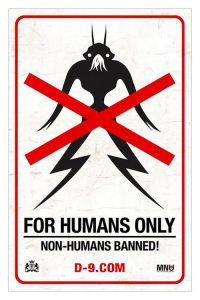 Look back later in the week for a full review, but it’s not really spoiling anything to say that Neill Blomkamp’s debut feature is the film I’ve enjoyed most this year – not that 2009 has been a banner year, but it does many things genuinely well.  Not the least of which is finally getting the connections between gaming and cinema and doing both justice.

Tagged as I - for one - welcome our new alien overlords

Duel of the Fates

Via one of my daily reads, the fantastic Super Punch, please enjoy the sight of animals engaged in Jedi Ass kicking via the equally inspired Animals With Lightsabers… 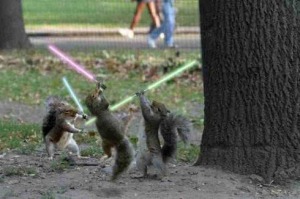 Duel of the Fates