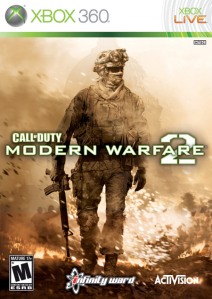 Suggested by Dan Amrich on his Twitter page, check out a fantastic video blog on the moral issues emanating from a play through of the  “No Russian” level from “Modern Warfare 2” by Anthony Burch at Destructoid.

As I’ve not played “MW2” yet, I can’t make an informed judgement on the now infamous scene when viewed out of the narrative context of the game, but seeing the footage in isolation is a very troubling experience.

For the main part, my shooter gaming tastes lean toward the “Halo”/”Gears” Sci-Fi end of the FPS/Third Person scale – I prefer to blast away at ravenous alien beasties and monsters rather than recognisable human avatars.  I don’t know that this makes me in any way morally superior, as the argument about resolving conflict through violence still remains, but I can happily plow through “ODST” and not feel that the events on screen are going to be repeated on the nightly news any time soon – the divorce from reality in an SF FPS is more or less total and allows for a retreat into fantasy which is in sync with the way that many of us play games.

That said, I played and really enjoyed the first “Modern Warfare” iteration of the “Call of Duty” series and found it a visceral, urgent and undeniably compelling experience.  In terms of fairly loathsome right-wing politics and self-justifying narrative, it left something to be desired – these guys are allied, somehow, with these other guys who want to do something fairly genocidal and nationalistic to America, so they’ve got to be stopped – but it went a lot of the way towards bridging the gap between the game space and action cinema (seen an action movie recently with any of the build and release tension of the ‘All Ghillied Up’ level in “Modern Warfare”?  Didn’t think so).

The “No Russian” footage from the sequel is certainly difficult to watch, but I find myself wondering if it bothers me chiefly because it seems to be asking questions about the way that we play games today, about the way that technology allows us to have realistic game avatars, perpetrate horrible acts, in realistic environments in a scripted narrative that we can’t circumvent if we want to progress in the game, all in the ultimate service of home entertainment.

Is a play through of “Modern Warfare 2” really what I want to do with my leisure hours?  And if it is, what does that say about me?  I’d never want to kill another person or sign up for military service, so why do people gravitate towards game experiences which offer a virtualised, interactive perspective on conflict and terrorism.

Is it the modern equivalent of crusing the wrong side of town, looking for trouble and the darker side of life but knowing that at the end of the day you can just quit back to the main menu and forget about what you’ve just encountered on screen.  After all, it’s only a game, right?