Another series of “Torchwood” drew to an end on BBC 1 in the UK on Thursday night and after watching the conclusion, I’m not sure that I want to see another one. 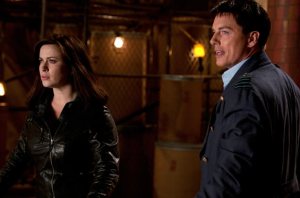 In which events are resolved, things are blown up and poor Esther...oh, watch the episode.

BIG CHUFFING SPOILERS quite obviously follow for the events of the finale.  Was it eccentric? Yes, definitely.  Did we get classic “Torchwood” moments of mind-futzing absurdity? Well, if you count doomed new girl Esther doing more stupid, illogical shizz to drive the plot along, yes.  By all means, Esther, please hand-deliver the vital Deus Ex Machina to that anonymous soldier dude you’ve never met before so he can turn out to be a suicide bomber.  Has the concept of ‘trust no one’ skipped a generation of US governmental operatives?  Did those illogical moments continue throughout?  Oh yes – the concept of the Three Families having eyes and ears everywhere and still not being able to outsmart Torchwood beggared belief.  This is an organisation whose approach to infiltrating a secret base is to make as much fuss as possible, enlist a deranged paedophile to strap explosives to himself and perform a globally-overlapping pair of wildly theatrical monologues when they should be kicking some arse.

Did Captain Jack Harkness (the character forever known to me and my friends as SexyGaySpaceJesus) have an ideal showcase to display his entire bag of tricks, with tragic pouting, tortured suffering and messianic posing all to the fore?  Yes, indeed.  Did anything get resolved?  Yes, the great Gaia-based Vajayjay running through the centre of the earth, and the rationale for the miracle underpinning the series, was rendered ineffective by a timely infusion of Cap’n Jack and Agent Rex’s commingled blood, vast spatters of O negative gushing out of their respective chest wounds and causing lots of stuff to blow-up in as cinematic a fashion as the budget allowed – which, in fairness, was pretty cinematic.

Was this stuff absolutely pulled out of Russell T. Davies’ bottom at the last-minute to try to bring closure to a story which absolutely wasn’t hanging together?  I suspect so.

Much debate online has revolved around whether there was ever enough plot to justify the 10 episode run and after watching the final episode it seems that there really wasn’t – there was five episodes of plot here and the meandering quality of episodes in the middle of the run utterly killed the momentum.

To summarise events – we’re in Wales, we’re in America, nobody’s dead, Captain Jack’s mortal, FBI agent Rex is alive, hang on – everyone’s alive, what does it mean, that evil undead paedophile’s a cult figure, Esther’s sister has mental problems, who’s going to look after Esther’s nieces, that doctor’s been killed off, there’s a secret conspiracy, three families, category one, let’s go back to Wales, Gwen’s Dad is Cat One, Gaia Space Vajayjay – not so much a plot as a truly terrifying Billy Joel list song, as yet unwritten.

Obviously, all concerned want to carry on with the show – the core “Torchwood” team of Jack and Gwen survived, oily PR witch Jilly Kitzinger survived to find a new job (what is Plan B?), Rex had Jack’s blood transfused on arrival in Argentina and now appears to have his immortality problem after an assassination attempt by undercover Three Families agent Charlotte Willis resulted in her death and Rex’s rebirth.

There’s presumably a story to tell in the next series if it happens, but I don’t know that this co-production approach was the best thing for the show, as it seemed to result in a series which was neither eccentric enough to be “Torchwood” true nor action-packed and conspiracy-driven enough to appeal to the viewers of a show like “24”.  Far more problematic for me – this iteration of the “Doctor Who” spin-off followed the excellent “Children of Earth” mini-series and had none of the bleakness, horror and tension of that five-episode stunner. It was a curious, hobbled kind of beast – just not weird enough for the SF heads and too bloody strange by half for the casual viewer to lazy to change the channel to ITV 1.