So, “SFX” didn’t like it quite as much as I did, but I warmed to this Toby Whithouse episode of “Doctor Who”  a lot more than his previous “Vampires in Venice”.  SPOILERS abound for the episode from herein.

The set-up is simple: The Doctor, Amy and Rory find themselves having not arrived on an exotic alien planet with 600 ft tall residents, but instead marooned in a dodgy hotel with a serious case of 1980’s decor.  The structure of the hotel is in flux with corridors shifting location, the walls are plastered with the pictures of former guests who didn’t escape and something deadly (and be-horned) is stalking the hallways.

Not as bad as evil clowns, a bit scarier than evil harlequins...

Within a few minutes, the Tardis’ fractured family group find themselves meeting another trio of hotel guests – Rita, a junior doctor, Howard, a nerdy conspiracy theorist blogger and cowardly alien Gibbis, who just wants to go home and have an invading alien race enslave him.  If you go into a room, you will be confronted by Your Worst Fears Writ Large.

What I enjoyed about this episode was the allusions to cultures high (the Minotaur in his maze) and low (The Overlook Hotel from “The Shining” loomed large, the Minotaur essentially being the Stay Puft Marshmallow Man from “Ghostbusters” was cool), some seriously evocative and horrible production design (my parents once worked in a hotel which looked very similar to the one in the episode.  And yes, it was that ugly) and great performances. 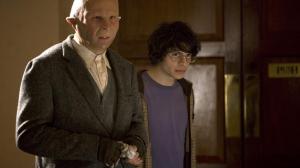 Nerdery and cowardly/stand together in perfect harmony...

David Walliams did excellent work as Gibbis – as the “SFX” review notes, the combination of his nebbish persona and Toby Whithouse’s script delivered a character who could have stepped into the episode directly from a chapter in a “Hitchhiker’s” novel.  And boy, when push came to shove, did his character demonstrate layers and facets of unique unpleasantness which made him more oddly human than alien.  Amara Karan, too, was quite wonderful as Rita, the level-headed junior doctor whose quiet resolve in the face of the threat had to be undone in a quite tragic way – she was on the Doctor’s wavelength, she had probably kept her group of survivors alive, and inevitably had to go into one of the hotel’s many rooms and succumb to her worst fear, draw solace from her deepest-held faith and be sacrificed for the greater good.

It’s here that the episode’s themes become most interesting.  I’ve been an atheist since my early youth, so the idea of summoning religious or spiritual faith to ward off evil has never had a particular resonance for me – equating evil with the supernatural is something that I can enjoy in entertainment but can’t believe In Real Life. So it was with some interest that Mrs Rolling Eyeballs pointed out, as she read this review, that Rory is clearly the Atheist analogue in the episode – he’s the only one who doesn’t have a Room 101 and the one who sees the exit.

I’m not sure that the episode was at its strongest here – the ‘fantasy’ part of the ‘science fantasy’ equation which drives “Who” seemed to win out a little and the explanation for the fuel which powered the interstellar prison which housed the Minotaur-like alien didn’t really satisfy me.  It’s the kind of thing that the writers of “Lost” and “Battlestar” pulled out of nowhere – when in doubt, introduce glittery space magic angels to explain away the complex stuff.

Leave them all behind...

Overall, though, it was an entertaining episode with an unexpected conclusion – Amy and Rory left (somewhat abruptly) back in their own time by a Doctor whose most recent brush with danger had left him apparently so shaken that he couldn’t bear to imagine a time when he would be culpable (or directly responsible) for the Williams’ death.  He’s done it before, I guess.

I can’t believe for a second that we’ll not see Rory and Amy again this series – spoiler fans will already know the title of the finale episode and that suggests that we’ve got to see them again.