In the future, even your eyeballs won't be safe...

I’m all for futurism.  Wi-Fi toasters?  Bluetooth underpants?  Hi-Def backpacks? Totally down with all of the above.

Sometimes, though, I begin to think that the interface of technology and humanity is going to places that I’m not comfortable with – witness Bitter Wallet’s story on Augmented Technology contact lenses.

Hence the use of the screen-grab from “Minority Report” above.  There was a film which seemed to get the future’s interface between humanity and technology bang-on.  Your eyes get a retinal scan whenever you walk into a shop and the contextual adverts update in real-time with recommendations based on your purchasing history.

I'm assuming that digital readers of augmented reality contacts won't be quite so terrifying...

It’s like a really terrifying, faux-omniscient Amazon Recommends reading your recent life every time you go to the Mall.  In related news, I don’t go to Malls unless I absolutely have to and can’t get out of going (A trait which I picked up from the wise and lovely Mrs Rolling Eyeballs whose blog title directly references “Minority Report”, fact fans).

Though the technology in the Bitter Wallet story has only so far been tested in lab conditions on Rabbit subjects as a proof of concept (because Bunnies are all about wearing contacts, yo….), one can only imagine that this stuff is going to have a subsequent application which directly impacts on a more human client base and which will inevitably be used to sell us stuff.

The history of technological innovation seems inexorably married to subsequent commercial usage – an inevitable by-product, I suppose, of the funding rounds required to develop anything worthwhile in our era.  You can’t develop something cool because you need money, which is available from private sector investors, who want results which can be effectively monetized to make a return, which arguably compromises innovation in turn because something esoteric but fantastic won’t reach a big enough market to be worthwhile. 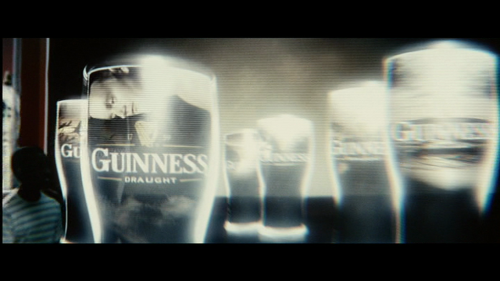 The lovely thing about “Minority Report”, of course, is that we’re supposed to be slightly disapproving of the technological society in the movie – it’s invasive, barely regulated and runs on gadgets which erode personal liberty which we allow because it gives us greater daily convenience (insert obligatory, anti-Mark Zuckerberg joke here).  Director Steven Spielberg meanwhile manages to get lots of brands and marques to liaise with his crew of futurologists to be featured in the film (a risky gambit, as any contemporary viewer of Ridley Scott’s “Blade Runner” will attest – it’s like a graveyard of once-prominent brands), which seems at least tacitly critical of the future it’s asking these corporate partners to sign up to.

So, corporate branding is bad – but here’s a nifty futuristic Lexus for you to covet…no mixed messaging there, then.

I think that we can all agree that companies having less direct contact with us is a good thing – and that the degree to which advertising can be used to influence our behaviour is something which shouldn’t be jacked directly into our cerebral cortex (well, eyes, but you get the point).  This may be a generational thing with me – I grew up reading Gibson, Sterling, Pat Cadigan and the wave of eighties ‘cyberpunk’ authors, so the idea of corporate interests feuding over who gets to control the future is one which resonates with me.

It seems that kids don’t necessarily have the same concerns – I think to many young adults, the labyrinthine agreements which we agree to when we set up accounts on internet sites so often implicitly guarantee invasion of privacy that its seen as the norm and nothing to be bothered about unduly.  Yes, you’re being tracked, tagged and scanned as you check in on smartphone apps or buy a song on iTunes, but that free stuff you got when you signed up more than makes up for companies data-mining the hell out of you.

Still, check out these cool adverts on my eyes, man – feels good…

One response to “Tomorrow’s cyberpunk today: augmented advertising on your eyeballs.”