Finally, a festive sweet that I can get behind.

This was featured over at CRAFT’s website and I couldn’t resist it –  why not find out how to make the gingerbread TARDIS above at the makers website – its the perfect accompaniment to the Christmas special, wouldn’t you agree?

Hands up – who wanted a second “Ghost Rider” film?

If you answered “Nicolas Cage’s accountant”, then full points for snarking.  Being a contrary old sort, I have to say that I actually quite liked the first one, imperfect and absurd as it was – Nicolas Cage and Eva Mendes were childhood sweeties?   Okie Dokie – that makes a whole bunch of sense…

The sequel opens in February and has been directed by Taylor and Neveldine, the deranged hacks who previously brought you the “Crank” series and the odious, half-witted, time-wasting pox on celluloid which was Gerard Butler vehicle, “Gamer” (a film made by people whose revelatory take on games is to mutter something about online gamers being fat nerds and then gawp at some hapless starlet’s breasts for two hours).

You want to get that looked at, mate...

This sequel is set in Eastern Europe and sees Johnny Blaze off riding the earth and trying to get rid of his ‘Ghost Rider’ curse once and for all.  This leads to him intervening in weird, demonic cult shenanigans to save a child – sentimentality alert! – and locking horns with Ciaran Hinds, who appears to have a slight eye infection. 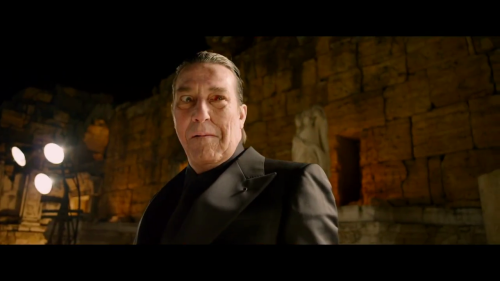 Hey up, it's Dumbledore's brother!

Eye infection/demonic possession – you can understand my confusion.

Anyhow, as with all superhero movie trailers latterly, lots of things proceed to blow up, jump out at you and generally try and EXCITE THE VERY FILLINGS FROM YOUR TEETH WITH AWESOME SAUCE! 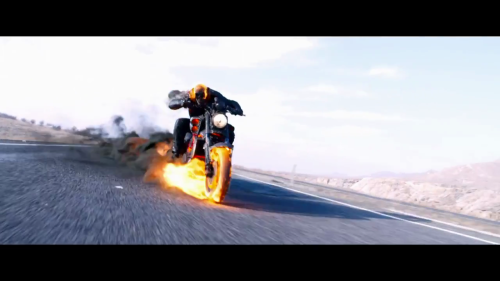 I’m not sure that they’ve entirely succeeded on that front.   The action looks to be as gonzo and OTT as it usually is in a Neveldine/Taylor film, but I’m not entirely sold on the ‘kid-in-peril’ angle.  There’s no need for a kid to be in a movie like this, with a character like this, unless it’s to roll out the old schtick about redemption, saving an innocent child from evil’s outriders – that’s stuff we’ve all seen 10,000 times before and it’s genuinely of no interest to me.

So that's where Christophe Lambert's been all these years...

I quite like the Eastern European vistas seen in the trailer – it’s nice to see a superhero movie venturing outside the US for a change (I can only think of “Captain America – The First Avenger”, the “Fantastic Four” sequel and “X-Men: First Class” doing this) and acknowledging that other countries in the world might quite like to have merry hell visited upon them in the name of truth, justice and flaming skulls. 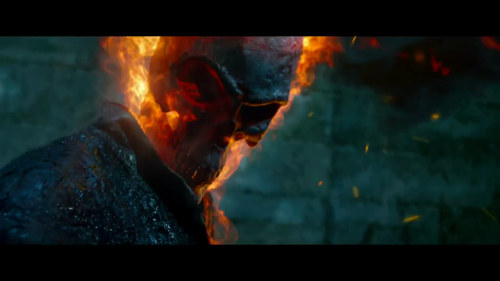 They've redesigned the skull, apparently. Can't say that I noticed.

I guess that I’m cautiously optimistic that this will offer decent, B-movie chuckles come the early part of next year – the track record of the directors doesn’t fill me with joy, but it’s hard to see how directors who usually aim fast, dirty and low can really mess up material that’s essentially goofy, harmless and drawn from similar storytelling cloth to the TV series “Supernatural”, which I’m really quite fond of.

I've got no idea how you film a bloody stunt like this. I assume the poor fella's still alive...

On the down side?  This is yet another PG 13-rated, post-converted 3D effort, the latter aspect of which still indicates that movie studios regard the format as an after-thought gimmick and solely a thing to check off on your marketing plan.  I’ve always said that if a studio can’t be bothered to stump up the cash to do 3D properly, I can’t be bothered to dip my hand into my pocket and throw any cash at them.

“Ghost Rider” opens in the US, UK and most European territories on the 17th February 2012.

Whilst the rest of us are wondering about whether to buy a copy of “Zumba Fitness” for the Wii or, you know, just stop being lard asses and go outside for a walk once in a while, our Japanese compadres are heading out to pick up Sony’s latest handheld console, the PS Vita.

Kotaku have launch coverage – which you can find here.

It all looks very nice, reassuringly expensive (have you seen the price of Sony Memory cards?  Oh, what japes.) and it’s almost certainly not going to be a niche product beloved of the gaming hardcore.  It’s not as if anybody with the kind of money that a Vita would go for would probably rather drop it on an Apple product, or anything.  Oh, heck to the no.  It releases in Europe from February and I’ll be doing my level best not to sell my blood in order to finance the purchase of one.

You can get your greedy mitts on one prior to release at Sony’s preview events, which with glorious predictability don’t appear to be paying a visit to Sheffield.    Well, you don’t want any smelly Northerners getting their hands on it, do you?