I am, as ever, a bit late to the party when it comes to discussing this film.

Partly due to the fact that I don’t go to the cinema nearly as much as I used to and partly because my backlog of stuff to watch is absolutely hilariously long, I didn’t get around to seeing this much-praised film from last year until yesterday.

Like all fine things, it was entirely worth the wait.

I had seen John Carpenter’s name banded about in connection with the film and I think that he would be happy with what writer/director Joe Cornish has delivered in “Attack the Block”.  Carpenter’s protagonists were often anti-heroes, stoic and wholly unable to trust authority for a second – Cornish’s band of teenaged  would-be gangsters fit into that mould really quite well, terrorising their middle-class neighbours and running from encounters with the Police during one spectacularly bonkers night on their London council estate.

Whilst Cornish is adept at humour – British fans of his work from Channel Four’s “The Adam and Joe Show” to his BBC Six Music show with frequent comedy partner Adam Buxton won’t expect this film to be anything less than hilarious – he’s also got an eye for staging action, horror and some surprisingly poignant moments of drama.

He’s also got an eye for actors – the ensemble here is utterly outstanding, with lead John Boyega a star in the making as gang leader and nascent hero Moses.  I can’t say enough good things about his work – he’s  capable of embodying sullen teenage attitude, quiet terror and the kind of charisma which would have you follow him into battle and he does it all with his brilliantly expressive eyes and a gruff, one or two-word statement.

He’s a classic Western hero transposed to the mean(ish) streets of South London and the only guy that his posse of fairly rubbish crooks can rely on – if you’re not punching the air and yelling “YES!” as he makes his climactic face-off against the alien invasion force then I’m afraid there is no hope for you. And given that, at the outset of the film, you don’t care whether his thuggish no-mark lives or dies, that’s quite a turnaround.

That’s the skill of this film, really – the ‘heroes’ are anything but at the outset of the film.  It’s via dialogue, performance, even set design at one point, we see that the kids you hope to avoid are – well – just kids and not quite the urban blight that politicians, tabloids and popular opinion would have to believe.

It’s instructive that this film finds ways to show all of the sides of its hood gang via brief, economic exchanges of dialogue and staging – there’s very little in the script which feels forced or Hollywood-simple. The world it creates is realistic and compelling, so it means something when the implacable alien aggressors arrive on the scene and start taking apart a high-rise complex which looks like the one you walk past every day. 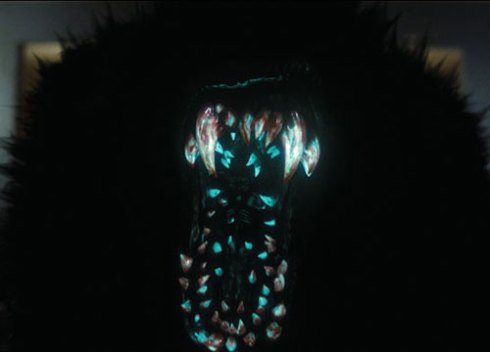 As for that alien menace – they’re brilliantly realised because they’re seen in flashes and never fully explained to us, making them more threatening as their motives are only guessed at.  They’re not the kind of planet-enslaving, portentous threat which might present itself in a “Trek” movie – these dudes are primal forces of toothsome, furry horror rather akin to the kind of malevolent pet which you might expect the Predator to have hanging around.

Oh, I LOVED this movie – it’s the best flick of its kind since “Shaun of the Dead” shuffled into our lives in 2004 and munched agreeably on our brains (not for nothing is this film produced in part by that film’s director Edgar Wright or does it star comedic good luck charm Nick Frost).

Give it a go, bang on the subtitle track if you’re having trouble with the accents, but make sure that you see it – it’s a reminder that you don’t need $300 million smackeroos to make a brilliant, taut sci-fi movie.