Regular readers of this blog will doubtless be aware of – and lamenting quite a bit by now – my inexcusable “Resident Evil” film fandom. 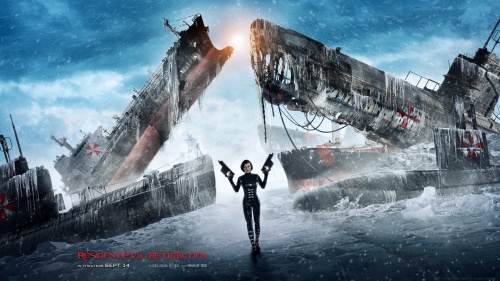 Massive, hugely absurd set-pieces wholly at odds with the original video games? Don’t mind if I do!

Given that it’s nearly September, I must forewarn the thus concerned that I may be posting a fair bit of guff and balderdash concerning the popular Paul W.S. Anderson shepherded film series. as the fifth entry “Retribution” will be in cinemas in the US on September 14 and in the UK a week later.  Expect much discussion of the heretofore hidden, unexplored nuances and deeply coded meanings inherent in the subtext of Mr Anderson’s bitchin’ Zombie smash-em-ups.  Or, like, reviews of the previous movies and junk.

Those of you likely to gag at the numerous ways in which this series of films has messed with the continuity of the games and the universe therein may wish to skip the odd post or two – I’ll try to make them obvious enough for you to be able to do that. 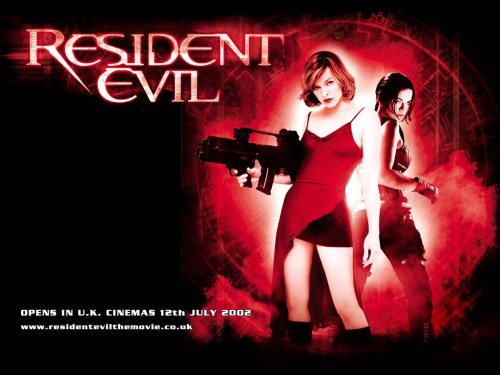 How we started, back in 2002 – when Marilyn Manson did the soundtrack and Michelle Rodriguez’ character popped her clogs for the first time…

Truth be told, the films and games began an inevitable process of divergence before the first movie was released ten years ago – other than the presence of the Umbrella Corporation‘s proverbial moustache-twirling villainy at the decaying heart of each plot twist, there’s been precious little to link the two cross-media properties, save for director/producer Anderson’s propensity to cut-and-paste in elements from the games which particularly tickle his fancy (uber-bad guy Arnold Wesker, Jill Valentine, Lickers and the like).

It’s this going-off-script, cavalier disregard for canon which seems to upset fans of the games so much – the “Resi” flicks would be an otherwise easy-to-ignore sequence of sci-fi/horror mash-ups , were they not performing double duty by offending fans of video games and the long-lived Capcom franchise – why does their pioneering survival horror video game sequence have to bear the unfair burden of being the poster child (in the eyes of critics) for mediocre ‘games-to-films’ adaptations?  And where’s their George A. Romero directed version of the first movie, more to the point?

I strongly suspect that your prospective enjoyment of the series is in inverse proportion to your love of genre fare in general – if you have an uncritical love of things that go ‘Boom!’ and ‘Aarggh!’ in the night, this franchise is almost certainly up your zombie-infested alley.  If you love Bela Tarr, however, the rather more rudimentary pleasures of a Paul Anderson genre flick are almost certainly going to be denied to you.

As an object lesson in seeing how audience and critical reactions diverge on films, take a look at the professional critical response and the general public’s take on “Resident Evil”.  What I take away from those responses, other than that film critics can write and the general public has some way to go in attaining that goal, is that people don’t go to these films for the same reasons.

It’s enough for many viewers to have familiar horror tropes, action set pieces, characterisation and even plotting in place when they see a film like this one – they neither want nor expect an entry in this series to deliver anything more than uncomplicated fun and the odd jump-scare.  Critics, meanwhile, seemingly have to take a jab at video games in the body of their review – perhaps on the basis that they view them as low art and incapable of conveying anything worthwhile to an intelligent viewer or because they are aware that their reviews are being read by an ageing audience who hold the same prejudices about the medium and adaptations thereof as they do. 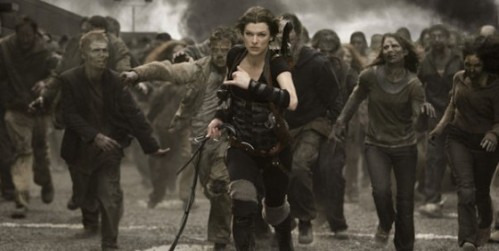 Those without knowledge of a subject matter presuming to publicly critique something in the full knowledge that they won’t have to answer criticism about it – what a marvellously tenable position from which to offer an informed opinion to an audience who will presumably take you seriously.

Expect more musings on the undead, Alice’s questionable Zombie-slaying attire, the confusing web of insanity which is the ongoing series’ plotline and the “Resident” iterations thus far in the weeks to come…