“Chronicle” is a divisive movie.  Trust me on this – when we watched this tale of teens with mysteriously acquired superpowers, my wife and I couldn’t have had more different opinions on it.  Spoilers, of a kind, may follow… 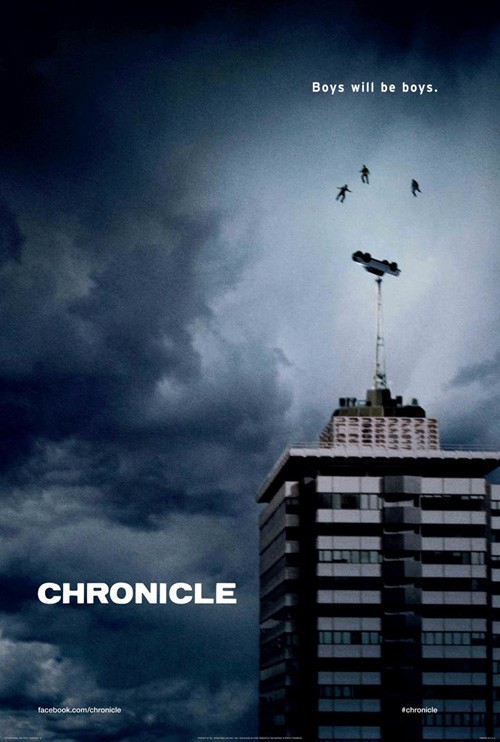 Beware those Emo kids at the mall – they’re gonna psychically mess with your shopping cart!

The marvellous Mrs Rolling Eyeballs was, to say the least, less than engaged by the film.  She hated the characters and felt that the story was non-existent.  Whilst I will concur that the story is fairly threadbare and that the protagonists were very much ‘types’ and not exactly boldly drawn, I really quite enjoyed Josh Trank’s debut film and marvelled at what he pulled together on a budget which might cover a single action sequence in “The Avengers”.

Starring nobody that you’ve heard of – though lead Dane DeHaan is the spitting image of a young Leonardo DiCaprio – “Chronicle” goes the “Spider-Man“/classic Marvel Comics route in gifting a disparate trio of high school lads with uncanny, telepathy-derived powers and seeing how they use/abuse them for personal gain.

So far, so predictable.  Where “Chronicle” scores best for me is in giving us teenage characters who behave probably as you might do if you found yourself wearing their Converses – rather than flitting around town stopping crime and being upstanding members of the community, these dudes prank unsuspecting mall shoppers and zip into mid-air for a swift kick-about (interrupted rudely by a passenger jet).

For the first part of the film – before things go positively David Fincher – this nerd troika reacts to their good fortune by using it for selfish gain and giggles and things only go south when DeHaan’s put-upon, abused nerd Andrew finds his reliance on his extraordinary gifts taking him to very dark, bully-destroying, patricidal, places indeed.

If you can get past the ‘found footage’ conceit – Andrew videotapes everything, in an effort to document his alcoholic father’s regular beatings – this is a very different take on the coming of age superhero origin story which we see so often.  The action sequences are remarkably effective – the climax being a particularly well-executed example of mass civic mayhem rendered on a budget more akin to Kevin Smith’s films than Un Film De Michael Bay – and give a tantalising hint of what an “X-Men” spin-off might look like if the makers of Channel Four‘s parent-worrying teen drama “Skins” got their mitts on the Fox franchise.

It’s an impressive debut and makes you wonder what director Josh Trank might do with the multiple projects – “Spider-Man” spin-off, “Venom”, the “Fantastic Four” reboot and video game adaptation, “Shadow of the Colossus” – that he’s attached to develop.

Who asked for a Fantastic Four reboot?

Reports circulating this weekend are suggesting that the director of forthcoming ‘found footage’ superhero movie “Chronicle” –  a trailer can be found here – Josh Trank is the front-runner to direct Twentieth Century Fox‘s reboot of their “Fantastic Four“ franchise.

Putting aside the fact that the only reasons for Fox to so eagerly pursue a reboot are that (A) Chris Evans is otherwise engaged , (B) they need another superhero franchise to fill those “X-Men” sized holes in their release schedule and (C) they want to prevent the rights from reverting back to Marvel, is anybody really calling out for a reboot of this comic series on the big screen?

I was quite fond of the first movie in the series and enjoyed the second instalment even more – neither were exactly Shakespearean in their scope and storytelling, but then they didn’t pretend to be.  At heart, the Fantastic Four have always been a dysfunctional family and the two films we’ve seen to date did a perfectly good job of making the FF bicker like brothers and sister on a particularly long road trip.

The reason that I note this is that some of the directors previously linked to this reboot – Joe Carnahan, David Yates and James McTeigue – are not the kind of film makers that one generally summons if you’re wanting to make light-hearted, summer adventure fare.  We’re talking darker, grittier and more adult fare when you want to hire those guys, and none of those adjectives exactly say ‘Fantastic Four’ to me.

Fox’s recent efforts at making superhero adventures have been variable in quality – for every superb “X-Men: First Class“, we’ve had an “X-Men: The Last Stand“ or – shudder – “X-Men Origins: Wolverine“, mediocre products of multiple levels of misguided interference.

Are we really to suspect that the studio will be able to resist the temptation to meddle with the property and not turn it into some ‘me, too!’ variety, Christopher Nolan-aping , would-be operatic glum-fest?   Nolan’s a one-off, married to the right project, to wonderful effect.  Chasing the ‘mature comics’ dollar didn’t exactly work for “Watchmen”, so why would Fox think that it might for Reed Richards and co?