Over at the TOR Books blog, Ryan Britt has posted a list of his 10 favourite funny sci-fi movies and it set me thinking about the titles which would make my list on the same topic.

No list of this type can ever be definitive – it’s a subjective discussion, after all, and one person’s cavalcade of hilarity is another’s overly forced, tiresome drag.

I have to agree with many of Britt’s choices – you can’t go wrong with Woody Allen‘s “Sleeper” or Mel Brooks‘ “Young Frankenstein“, after all.

One title which didn’t make the TOR list is the 2009 British comedy, “Frequently Asked Questions About Time-Travel”. 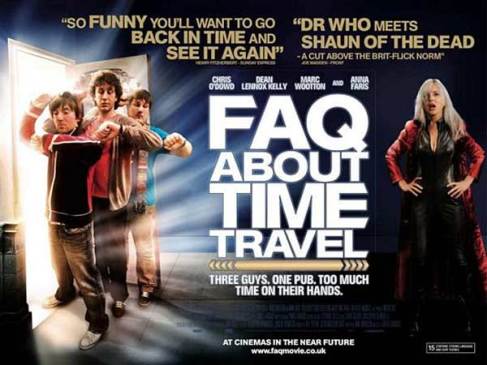 If you’ve ever watched an episode of “Red Dwarf“, this film is right up your intergalactic sub-sector.  The humour veers between the broad, laddish banter between the trio of hapless male friends and a more subtle, well-considered brand of wit inspired by the inherent complications which accompany flouting the rules of time and space, with a late period diversion into bleak black comedy as events get ever more grim.

There’s a welcome bit of romantic sub-plottery between Chris O’Dowd‘s dyed-in-the-wool nerd and a mysterious woman with an agenda played by the oft-welcome Anna Faris and a nifty post-credit gag which sets up a sequel that we’ll never see in this universe (in a  parallel one, this film probably outgrossed “Avatar” and is a billion-dollar franchise).

Another film on my list and not TOR’s is the 1985 teen sci-fi comedy “Real Genius” . 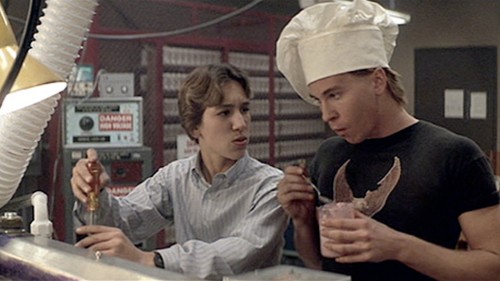 It's all good college fun until somebody invents a doomsday weapon...

And we’ve come from this to “Project X”.  Oh well.   This is a  teen-orientated comedy which seems the very height of sophistication in comparison to the flicks aimed at a young audience in recent years – certainly, director Martha Coolidge didn’t have to worry when making her film about the cinema being lit-up by a steady procession of social media slaves compulsively updating their status’ whilst ostensibly having paid to see a film.

From a day when the leads of these films looked genuinely nerdy, “Real Genius” is the feather-light but wholly entertaining tale of a young science geek skipping high school and finding that the gifted programme at his university is being exploited to develop new and exciting military weapons, a development which doesn’t sit well with the nerds, geeks and Mensa-heads unknowingly tasked with helping the government.

Watch this vintage 80’s trailer and let your noggin boggle at how anybody ever went to see this film – you think trailers are bad now?

Skipping over the likes of “Men in Black” (the first one’s glorious, the second one somewhat less so), “Galaxy Quest“ (clearly the best sci-fi comedy flick of recent years) and the “Bill & Ted” series, I’m going to cite a classic which you owe it to yourself to see if it’s somehow escaped your attention, albeit one which is better described as a fantasy flick than a sci-fi piece.

If Hollywood ever remakes this film, I'm inventing time travel and acquiring an elite squadron of Little People. The results will not be pretty...

I can’t imagine a film with this much imagination and eccentricity ever getting in front of a camera in remake/remodel obsessed Hollywood.  Whilst the high concept is ripe for a digital do-over, it’s difficult to see much of the insane playfulness and surprisingly bleak tone  of Terry Gilliam‘s 1981 adventure appealing to a studio system where all rough edges and ambiguity are avoided at all costs.

See this for a delightful ensemble of gifted comic actors and a performance of sublime creepiness by British actor David Warner – between his portrayal of supreme evil in this film and his role as Sark in “Tron”, his cruelly imperious face was synonymous with highfalutin, dismissive villainy in 80’s fantasy movies – see him also in “The Company of Wolves”, “Waxwork” and some art house pic called “Titanic”.

Any Gilliam movie is worth your time – especially if you’re a younger geek and aren’t familiar with his long history of singular fantasies – but “Time Bandits” brand of adventure, comedy and bitter-sweet adult realities is a must see.

Your thoughts on the best Sci-Fi/Horror/Fantasy comedies in the comments, if you please?