Rest assured, would-be viewers of “Iron Man 3” , post-“Avengers” fatigue has not set in.

Rather than find ways to go bigger and invest millions of dollars on a futile, tail-chasing exercise in upping the intensity of the stunts and action, “Iron Man 3” refreshingly realises that less can be more and paces itself accordingly, finding time to fill the screen with both retina-dazzling sturm und drang and funnier, more low-key character moments for the cast.

This is, be under no illusions, quite the funniest “IM” movie so far – the quips, bits of business and situational absurdity are gloriously integrated into the film, balancing the tension and central mystery of the main plotline with moments which let just about every major cast member crack wise at least once or twice (even Tony Stark’s personal A.I. construct Jarvis gets a fantastic, scene-capping one-liner).

It wouldn’t do to spoil the plot for you too much, so let’s just say that the events of the battle of New York have taken a toll on Robert Downey Jnr’s Tony Stark and sent him into a spiral of stress, suit tinkering and general bubble-dwelling which sees him picking fights, seeing the trappings of his life stolen away from him and having to go back to his engineering roots to try to salvage something of value from the wreckage he finds himself wading through.

Going back to basics can be a risky strategy but it really pays here off for writer/director Shane Black and his cowriter, Drew Pearce.  Stark’s gadgets and armour are the main attraction for some, but Black and Pearce choose crucially to focus on Downey Jnr’s quick wits and energy, making this the first “Iron Man” entry that I can recall where the hero spends more of his time out of the suit and employing his ingenuity to solve problems and save the day.  Think the opening 30 minutes of the first movie – but this time, that’s the focus of what Stark has to do this time.

No bleeding-edge, gadget-strewn lab, adorable robot helpers or suit which can blast the bad guys into next week to make things easy – just a fast-talking, goatee-bearded Einstein with no filter between brain and mouth and an abiding desire to sort a particularly thorny terrorist issue who goes by the name The Mandarin.   I particularly enjoyed a sequence during this stretch of the film where Stark has to use the supplies available at a Big Box DIY goods store to cobble together a suitable collection of toys for a smash-and-grab mission – it’s like “Mission: Impossible” if Adam and Jamie from “Mythbusters” were running IMF…

You’ve seen Ben Kingsley as the character if you’ve watched the trailers for the movie, but you probably don’t have any clue as to just how good the British actor is in this film – Kingsley gives a magnetic, compelling turn here and demands your attention whenever the plot compels him to appear on-screen.  It’s best to approach the film on as much of a self-imposed media blackout as you can, so as to avoid some of the plot reveals and spoilers out there in the great digital aether  – certainly, the Mandarin should be seen with as little foreknowledge as possible.

If there’s one member of the cast who didn’t register as well for me, it’s Guy Pearce – his mysterious Aldrich Killian is initially fascinating but soon becomes rather humdrum when his motivations are revealed.  The script falters here a little, too, when dealing with Killian’s mysterious tech think tank, A.I.M.  We veer away from a world where the technology is futuristic but somewhat believable to a world where characters are suddenly doing stuff which is more in the realm of sword-and-sorcery fantasy than the techno-thriller territory of the rest of the film.  And as the film has established that there’s no Asgardian players on the field for this adventure, the disconnect is rather too abrupt.

It’s a minor misstep, though – the film barrels along with verve and that aforementioned embedded funny bone, even chucking in a world’s first, by buddying up Stark with a fatherless kid and making their relationship charming and enjoyable rather than Hollywood saccharine and unbearable.   It all ends with a climax which draws a neat line under the trilogy and Tony Stark himself, allowing Marvel and Downey the freedom to whatever they want with the character – it might mean no more solo Stark movies, it could mean that we just see him in “The Avengers” sequel but it’s a great way to round things off and give both audience and actor a neat grace note for the character to (temporarily) ride off into the sunset… 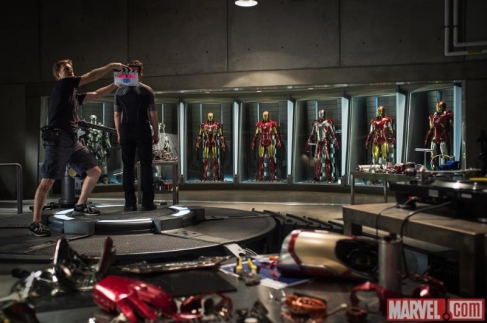 “The Avengers“ did pretty well at the box office this spring.  It’s as popular as Justin Bieber-flavoured dental braces would doubtless be, if some lunatic made them (idea copyrighted and trademarked, people, step away…).

Accordingly, phase two of Marvel’s ongoing “Avengers” project is in motion, with the justifiably emboldened folks at Marvel sharing with us the first proper set picture from “Iron Man 3” – which you can see above.

We’ve already had a few leaks and sneaky shots grabbed from the film’s shoot in North Carolina, which seemed to indicate the presence of Iron Patriot, which might worry those of us who don’t want to see “IM3” conclude with another mano-a-mano battle between dudes in suits.

I mean, I know that the premise of the character implies a certain amount of suit-bound butt-kicking, but it would be nice if splendid film maker and writing icon Shane Black found a smart way to resolve his story without having steel-on-steel fisticuffs saving the day.

We shall doubtless get to see the first teaser trailer for this threequel by the end of 2012, with the film rocking multiplexes and Repulsing box office records down on May 3, 2013…

A few bits and bobs of note broke over the weekend and I would be remiss if I didn’t waffle a little about them.

Warner Brothers have confirmed (via self-obsessed movie snarker Nikki Finke) that the final trailer for “The Dark Knight Rises“ will be attached to prints of “The Avengers” when it opens in the US on May 4th.  There’s definite method to this madness – the audience that I saw “Wrath of the Titans“ with the other week seemed surprised to learn that there was a new Batman movie due imminently, so anything that the WB can do to build awareness amongst the normals seems like a good idea to me.

There’s some sporting event or other happening in the UK this summer, you know – it appears to have monopolised people’s attention somewhat.

Meanwhile, back in the land of Marvel, Guy Pearce has apparently signed on to play a leading role in “Iron Man 3” – which is apparently taking more than a leaf out of the Warren Ellis-penned “Extremis” storyline, which is fine with me.  I’m really keen to see what writer/director Shane Black comes up with, particularly as sources close to the production indicate that this is a more real-world/techno-thriller take on Tony Stark and won’t feature another climactic set-piece which involves two or three blokes in variants of the Iron Man suit knocking the crap out of each other.

Yep, I’ll believe it when I see it, too. 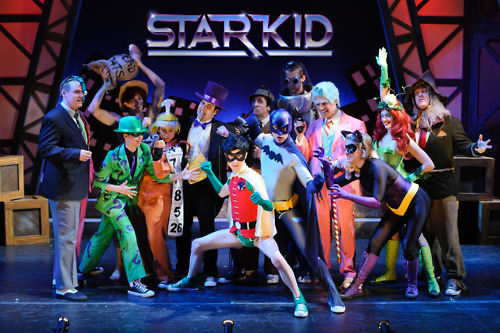 No, you're not hallucinating. Well, I assume not...

Finally, and by jingo there’s no way one could top this, the unofficial “Batman” musical is a thing and it’s apparently getting great reviews from people who aren’t insufferable hipsters: I know, right?

Depending on where you are in the world, the latest sci-fi action flick from Luc Besson’s Europa Corp is titled “Escape From MS One” or “Lock Out: Maximum Security”.  It’s enough to cause mucho confusion down the multiplex on a Saturday night, should your mind not be on your viewing game.

Who let Michael Bay behind the camera?

I’m probably preferring the “Escape From MS One” variant, if I’m honest, as it offers a subtle homage to the discerning nerd cineaste that this film is wholly in thrall to John Carpenter’s glorious “Escape from New York” (and “Escape from LA”, of which we don’t speak) and no greater template could a genre film-maker have than that snarky, mean-spirited and singular B-movie.

Near orbit, zero-G, white knuckle base jumping, anybody?

There’s a bit more action in this trailer – not all of it brilliant, some of it looking like it escaped from a PS2 game cut-scene – and a bit less of Guy Pearce being all hard-boiled and bad-assed, but the cumulative effect still has me keen to go and support a smaller-scale genre picture when it opens in April.

It’s all about balance, really.  $200 million blockbusters are all very nice but a decent B-movie warms the cockles of my heart.  And if John Carpenter can’t (or doesn’t want to) make this kind of movie any longer, I’m kind of glad that Luc Besson’s production auspices are letting them happen. 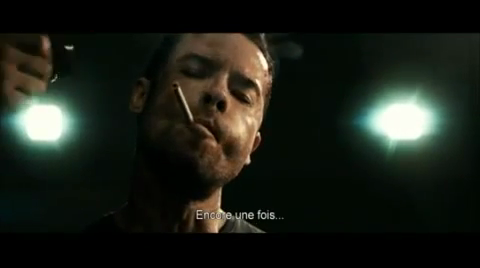 Thanks to those quick-on-the-draw types at NeoGaf’s Off-Topic forum I was able to find the first trailer for the latest sci-fi actioner from producer Luc Besson’s gallic B-movie assembly line Europa Corp, “Lock Out” .

And it’s looking okay.  The tone of the trailer’s opening first half, with Guy Pearce taking a beating whilst snarking at his captors reminded in no small way of Bruce Willis’ performance in Tony Scott and Shane Black’s neo-noir nineties classic, “The Last Boy Scout”.  For those in any doubt, that is A Very Good Thing, Indeed.

This film, meanwhile, sounds for all the world like a big old riff on the glorious John Carpenter/Kurt Russell eighties sci-fi “Escape From New York”, taking the premise of a down-at-heel loser getting a chance at redemption by rescuing the president’s daughter and setting it in space, with the rescue mission set on an orbital prison overrun by its inmates.

It’s due out in the spring of 2012 and seems to have just the right measure of self-aware humour to mentalist sci-fi action – this is one genre pic that I’ll be keeping an eye on.