Back from the Boneyard

It might help if I were to tell you that it refers to a song by a British hard rock band, Little Angels, who were active from the mid-1980’s to the mid-1990’s.

No (visible) tattoos? No piercings? What kind of clean-cut lunacy is this?

And why am I mentioning a song that you’ve never heard, by a band that you don’t know, on this of all days?

Well, Little Angels have reformed and will be one of the bands playing the Download festival in the UK this summer, which is all very nice but hardly earth shattering news.  Once-dormant Nineties rock band re-ups for a festival appearance – it’s the kind of thing which happens every year (see also Ugly Kid Joe, who are playing Download 2012, too).

Where this all comes together for me is that Little Angels are inextricably linked with my love of music, with my formative years and with the place where I spent much of my life growing up.

I was born in Scarborough, which is a small seaside town in North Yorkshire, in the north of England.  It’s the kind of place which buzzes in the summer months and slams abruptly to a halt once September rolls around.  Living there in the 1980’s was a chastening experience.  It was too far away from the major cities in Yorkshire – Leeds, Sheffield, Bradford – to really enjoy anything like a music scene, and so going to see a band live was a matter of seeing a local group and hoping that the cold weather and lack of anything much to do in the town had encouraged them to stay indoors, practice and be worth seeing. 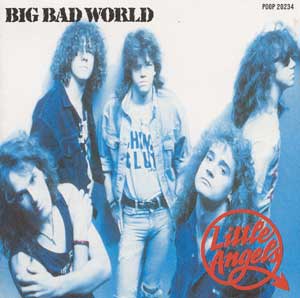 Behold - 1980's rock hairstyles. Look upon this, BMTH fans, and weep at your good fortune...

Little Angels – or Mr Thrud, as they were once named – were one of those small local bands who went on to amount to something in the wider world.

Led by corkscrew-curled screaming hellion Toby Jepson – a singer whose command of the RAWK! scream was undoubted – and comprising brothers Bruce and Jimmy Dickinson (lead guitar and keyboards respectively), bassist Mark Plunkett and drummer Mark Richardson, the Little Angels were arguably responsible for getting me into music in a big way. So, blame them when I post some story about a terrible Euro-Metal band – it’s sort of their fault.

I guess it’s always the way – a local band, even if they’re playing the crappiest dive club, can seem like stadium-bestriding rock stars merely by the act of getting up on stage and having a go.  When you live in a place where the default pursuit on a weekend evening is to get obliterated on cheap beer and get in fights, seeing a great band like Little Angels going on to release records, tour internationally and not settle for a mundane existence.

They never became anything more than a momentarily successful British rock band – similar in popularity to You Me At Six or Bullet For My Valentine – but I loved them and I’m really glad to see them back.  Hopefully this reunion will lead to more shows and recording – you can bet that I’m getting tickets if they ever show up in my neck of the woods.

Why not indulge me by taking a look at the tune which gives this post its title – “Boneyard”?   Did this really come out in 1991?  That’s like a whole Wolfgang Van Halen ago…