Regular readers of this blog will be aware of my opinions about illegally downloading a band’s music.  If you want to try a track out, there are probably streaming services that you can check out and, most likely, the band will post samples of their songs on their website. There isn’t really a great argument for stealing a band’s work – as frustrating as it can be when a record isn’t easily available, there are usually legal ways to get a cd or pay for an album.

For the most part, I feel that serial downloaders just grab music so that they can say that they have it – they arguably have no intention of ever listening to the stuff they’ve got on their hard drive, but they have boaster’s rights on having 20,000 songs on several drives.

Lead singer of Canadian metal band The Agonist, Alissa White-Gluz, has a very direct and honest take on the effect that stealing an artist’s music has on them over in an interview carried at Blabbermouth.net, ahead of the summer release of the band’s next album, “Prisoners”.

Bands at The Agonist’s level do not have the support of CD sales to help support touring costs any more and can’t rely on selling a quarter of the records which they might have done before the advent of P2P and file-sharing decimated the careers of ordinary working musicians – that side of things has gone almost completely by the wayside.  This would be fine if iTunes/Amazon and stores of that ilk had stepped in to fill the gap left by physical retail locations and if consumers bought music rather than nicked it, but we know that there’s an entire generation of kids who don’t have an issue with theft if it means that they can listen to songs and music on a whim.

As to who pays for those songs to be recorded, who funds artwork, mastering, the cost of musical instruments, rehearsal space hire, pays rent or buys food – none of that stuff seems to occur to a kid searching a torrent site and seeding and reseeding the latest album by a band or artist which they profess to love.

I wonder if it’s a problem of perception – a kid sees Katy Perry or Will.I.Am living the life of tabloid-created pop celebrity and somehow conflates that exaggerated single example into a deluded narrative where every musician lives large.  A single download of their favourite band’s album is justified because somebody’s buying the record, surely and we don’t live in a world where the vast majority of people who would have bought music no longer do so?

This kind of logic-skipping justification is easy to imagine and, I feel, one factor in why this problem exists – it’s a crime where the after-effect isn’t seen by the perpetrator because it happens at a remove and anonymously, for the most part.

None of which is part of my clarion call to get you to stop doing what you might be doing and to save the recorded music industry.  I think that the best effect of making music more digitally available should be to remove the barrier between fan and artist – a punky, DIY approach to distribution of music rather than a model which hides bands behind artificial barriers and doesn’t allow artists to directly communicate with the people who love their work.  If you can buy from the band’s website and giving them more money than they were ever getting under the model of CD buying, shouldn’t that be a goal?

Most people don’t have a lot of cash at the moment but that isn’t an excuse to steal from people who’ve worked hard at their art and deserve some recompense. Not an imagined millionaire’s lifestyle, but a decent amount of money for doing their job.

ACTA is the new SOPA?

Now that the internet has calmed down a bit about anti-internet legislation SOPA, should we all start worrying about ACTA instead? 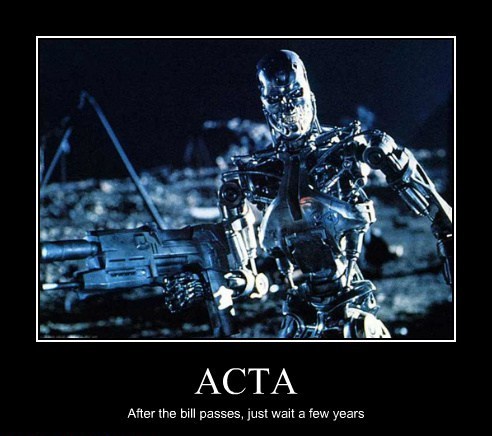 If you’re not up to speed on your legal challenges to a free, unregulated internet, ACTA is the Anti-Counterfeiting Trade Agreement and purports to do as its name suggests and enforce the regulation of intellectual property rights in signatory countries.

This proposed legislation won’t be debated fully before the European Parliament until June,

but a prominent MEP has already resigned, citing behind-the-scenes manoeuvres by officials preparing the agreement for his reticence to participate in a debate which, it seems, is less of a debate and more of a signed, sealed and delivered mandate which doesn’t really resemble democracy or the practice thereof by my understanding.

Of course, one might argue that a 14-year-old kid firing up a sweet Torrent client and illicitly downloading the new Drake album or a dodgy copy of the new “Sherlock Holmes” is engaging in a form of anti-democratic activity which is ultimately far more harmful to musicians, producers, record labels, CD pressing plants, distribution companies, retailers and a myriad of inter-related interests and we should be doing something about that, but I digress…

Colours nailed to the mast, I feel that we need to allow musicians to make a living from making music.  I’m not at all certain that SOPA and ACTA do anything more than bolt the stable door long after the prize pony has made a run for it, but if they do anything, they might just set some alarm bells ringing in the heads of folks who use the internet and don’t think twice about downloading music without, y’know, paying for it or even thinking about the implications of what they’re doing.

Lots of people in the world are finding their respective economies tough to deal with and I absolutely understand that – things like entertainment are a luxury which many people have to think twice about before paying out money for, but a dubious downloaded file isn’t an answer and only ends up screwing over a singer or band who’s at the bottom of a long line of music industry people who get paid long before the artist does.

I’m damned if I know what the answer to this problem is – we have a generation of kids now who don’t view ‘owning’ a physical copy of music or a film as being at all relevant to them and I think that’s partially what terrifies the established entertainment businesses because they can’t keep marketing new media formats to a demographic who regard their product as being ephemeral and not something that they need to have access to on a long-term basis.  If you get your tunes online, via a phone handset, why do you need to have shelves of CD’s which you might rip once to a hard drive and then never look at again?

So, if I’m reading this correctly, the whole problem with copyright is a generational one and as long as that divide exists, there’s no good solution to it beyond some entrepeneur coming up with a service which gives the kids what they want, gets the suits their cut and somehow doesn’t screw over the creative types either?

Good luck sorting out that problem…