As you may know, Sunday 3rd February 2013 will see devout fans of rugby with padding sit down across the US to watch the Superbowl.  This, for the still uninitiated, involves a great deal of theatrical fuss and sportsball-based pageantry before the real point of the day arrives – advanced trailers for summer movies.

To which end, that most inexplicable of modern marketing trends rears its ugly crown anew – trailers for trailers.  We’re through the looking-glass, people – ads for ads.  What a strange world we find ourselves residing in, and no mistake.

You’ll be able to see new spots for “Iron Man 3”, “Star Trek Into Darkness”, “The Lone Ranger” and “Fast 6” amongst others – and I’m reasonably sure that they’ll be more interesting than lots of financially well-remunerated chaps thanking variously unfortunate deities for intervening in the success or otherwise of their Hand Egg-centric shenanigans. 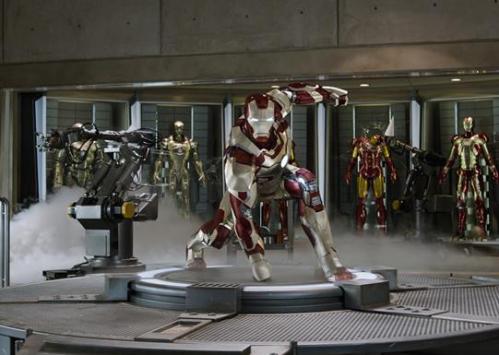 Lookit! He’s got a new suit!

We live in strange times – witness the trend towards advanced teasers for film trailers.

Yes, that’s right – an advanced glance at an advance glance of a film which doesn’t arrive for months is the newest way that film companies have dreamt up to keep their products in the popular conversation in this age of blipvert attention spans and social media accelerating our expectations for the newest, fastest stuff now.

Getting in the action are Marvel, who engaged in a Facebook ‘like’ campaign to release stills and a 17-second look at the forthcoming trailer for next spring’s “Iron Man 3”, the first movie from the House of Ideas following this summer’s “Avengers” and it’s blockbuster success.  The full trailer is scheduled to show up on Apple’s site on Tuesday, but if you’re spectacularly impatient (and have a Facebook account) you can find a glimpse here…

So, the embargo’s gone south and we can finally read what critics have made of Joss Whedon‘s eagerly awaited superhero flick, “The Avengers”.  Farrago or Thrill Ride? Clue? Happy fun times await you at the multiplex.

I’m kind of happy to see some moderately grudging points in the reviews I’ve read to date, because there’s no such thing as an absolutely perfect film and everything that I’ve read to date suggests that Joss Whedon has been able to step up to the challenge of filtering his own particular brand of nerdery into the very specific DNA of a summer blockbuster franchise flick, but not without some minor issues.

Wit married deftly to blazing action sequences, vivid and economic characters meshed with property-trashing spectacle and unexpected nuance woven throughout the default, eye-popping chaos of a Marvel Superhero flick – you can’t really ask for much more than that, can you?

As movies get bigger and more spectacular, it makes sense to cover some of the financial risk by attracting deep-pocketed investors to share the finances and eventual rewards.

Cue Marvel, whose next “Iron Man 3“ will be a Chinese co-production.  On the face of it, this makes a lot of sense as China is the very definition of an emerging film market, with a potentially massive audience primed and ready to enjoy the visual kinetics of this superhero sequel and shell out on the acres of spin-off merchandising which usually accompanies such a prominent franchise entry.

Sure, there’s that whole piracy thing to take account of, but the fact that China is allowing more Western films to be distributed and made there would indicate that all concerned realise that there’s a lot of cash on the table and what better than a film featuring the world’s most risk-averse fictional capitalist to be at the vanguard of this cultural expansion?

Just don’t mention Foxconn or anything…

Yep, not enough awesome in that pic.

So, there’s this small superhero flick opening in a few weeks – you may have read the odd post about it on this blog?

“The Avengers”  (or “Avengers Assemble“, if you live in a small and confused island in Northern Europe) had a glitzy premiere in Los Angeles last night and has prompted very positive early reactions from the  press types who were lucky enough to see it.

My personal highlight of the Tweet-fest,  from noted contrarian and geek critic Devin Faraci of BadAssDigest –

“AVENGERS is good enough to make me forgive IRON MAN 2“.

Yoink!  Not that “Iron Man 2” was that bad – that Monte Carlo fight scene kicks all kinds of booty – but it’s probably the biggest misstep in Marvel movies to date.  Another movie in a young series which ends with an extended action sequence which plays like a rejected pitch for a Rock ‘Em Sock ‘Em Robots movie is not my idea of moving the franchise forward – I’m guessing that the team dynamic of the Avengers squad may have something to do with Faraci’s reaction. 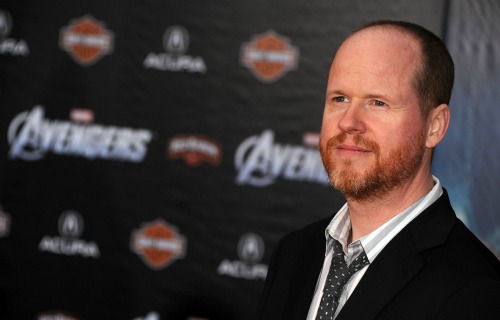 Joss Whedon, nerd-father rising. Haters to the left, if you please...

Your actual, proper reviews are still embargoed but I don’t see that state of affairs continuing much longer if this early buzz is any indicator…