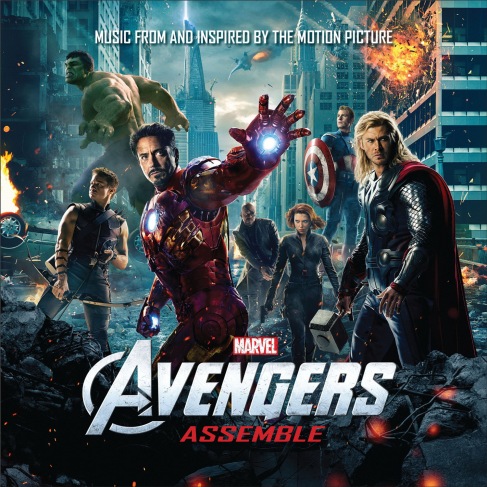 Yay for targeted marketing!   In a perfect storm of nerdery, questionable taste in music (mine) and first week sales promotions, the good people at Amazon had a deal this week which offered both the Alan Silvestri original score for “The Avengers“ and the rock-focussed “Music From and Inspired By” soundtrack album for the princely sum of £10.00 on the MP3 store.

The Alan Silvestri score is very solid stuff, if ever so slightly reminiscent of his previous work – you might well find yourself going “Hmm…that sounds very much like the music from ‘Back to the Future‘, don’t you know?”.  I’m quite fond of Black Widow‘s theme – “Red Ledger”, a percussive action piece called “Assault” and all of the pieces which accompany that thing with the stuff (I don’t wish to spoil the movie for anybody who hasn’t seen it yet, but “Assemble” and “One Way Trip” are adrenaline-racing fare and score some of the most air-punching/nail-biting bits of the film’s climax).

As to whether you would like this album – do you like to wash dishes and pots to Murray Gold‘s “I Am The Doctor” and Hans Zimmer‘s “The End?” (from the recent “Sherlock Holmes“ sequel)?   You do?  Get on this score – it’s right up your alley. 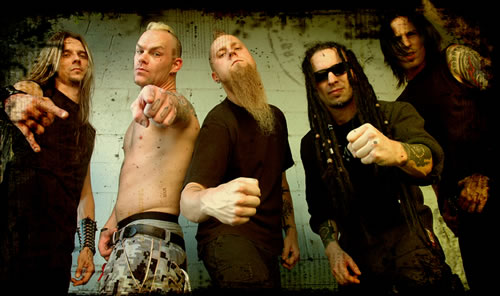 Now to the more divisive release of the two.  I’ve written a yippy-skippy piece about the “Music From And Inspired By” soundtrack album previously and I have to admit that I’ve lost none of my affection for it now that it’s on my iPod.  Well, let me clarify that – I could have done without Five Finger Death Punch‘s cover version of Faith No More‘s classic “From Out Of Nowhere”, which is clearly a case of a band turning in their take of a song which they loved in their formative years.  I don’t hate Five Finger Death Punch as much it is now apparently the law to do – never heard much by them, to be honest – but equally I’m not sure that the world needs a gruff, heads-down cover of a nuanced, singular song by one of the most underrated bands of the last twenty years.  If you love Ivan, Zoltan and the boys, your mileage may vary.

No, I’m going to keep my ire firmly for dreadful British hipster dreck Kasabian – they appear on the ‘international’ version of the soundtrack with their tune ‘Pistols at Dawn‘ and will be getting resolutely skipped from here forth: I’m not a fan, oddly enough.   In the context of the record – Shinedown, Evanescence, Buckcherry – wouldn’t a band like Halestorm be a lock for inclusion?  I suppose that I’m just grouchy because there’s not even a hint of DragonForce or Pythia on the soundtrack…

It is very much as you would expect, in fact – targeted at a variety of rock fans, with the younger set taken care of via everyone’s favourite Motley Crue tribute band, Black Veil Brides (for all my snarking, their song “Unbroken” is catchy as hell) and the aforementioned FFDP.  Their older brothers and sisters get Papa Roach, Rise Against (who somehow pull off being punky, poetic, anthemic and grumpy all at the same time – kudos!), Shinedown (really quite liked their song, “I’m Alive”) and Soundgarden to bump in their Ford pick-up trucks.

Bush are still around and sounding not terribly different from their heyday and the smattering of newer artists – Cherri Bomb, PusherJones and Redlight King – don’t amaze particularly but don’t offend either.  Cherri Bomb being the pick of that crop, for me at least.

In short – I quite liked the soundtrack.  It’s a promotional tie-in for a huge juggernaut of a movie but I liked a lot of the stuff on here and would recommend it to folks who want to check out bands they’re not currently into (Shinedown, on this evidence, will be a band I might want to have a longer listen to).  And I’d certainly sub-out Kasabian for Theory of a Deadman (who are on the US release), coolness be damned. 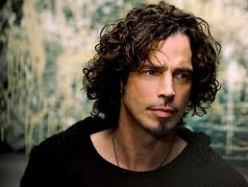 Fresh from debuting his band Soundgarden‘s first new music since 1996, lead singer Chris Cornell has a sobering message for those of us with ringing ears and luxuriant tresses.

Per an interview with noted rock bible “Details”*, Cornell states for the record that “Rock has lost its place at the centre of the musical universe”.  And, much as it pains me to add currency to this kind of notion, I think that he’s got a point.

*“Details” is as much a rock bible as “Kerrang!” is nowadays – in fact, “Details” may have more rock cred…

Citing American radio’s antipathy towards new rock bands, a fracturing of the creative process enabled by technology and the seemingly irresistible allure of recreational substances, Cornell paints a bleak but – to me – wholly accurate picture of where music is right now.

Once the ease of file-sharing/cut-throat IP piracy (delete as applicable) made making a living from music a labour only slightly less difficult than raising the Titanic, the infrastructure which one could rely on to inform an voracious audience about new music was changed itself – we’ve never had an easier time of finding new music, consuming it and having a new favourite band but our relationship with that music has changed so much that it’s difficult to see how anybody but an established band being able to sustain the kind of career which Cornell and Soundgarden have enjoyed.

Music has never been more of a service or a backdrop to people’s lives than it currently is.  It’s the driver which powers reality TV competitions and nominally the thing that Katy Perry or Rihanna are famous before (that is, before parallel careers in film or fashion present themselves).  That implosion of the traditional music business career model – you can’t sell records because a tiny percentage of music fans pay for music – means that you have to evolve beyond the accepted path of what a musician does.

I find that somewhat depressing, to be honest with you.  I’ve always found that music was one of the most transcendent forms of art – capable of transporting you away from your immediate environment in a different way to the written word and able to make you forget about life and your everyday woes in a way quite distinct from films or television.  It’s more immediate than that kind of directed experience and capable of making even a suit-wearing, twelve-hour day executive lose their inhibitions and go bug-wild at the sound of a power chord struck in faux-anger.  To think that music is the jumping-off point to do something more lucrative or ‘better’ is very aggrieving.

For Cornell to feel that this pathway to shared community or tribal belonging – call it what you will – is something of an admission that for a generation younger than mine, music is ever more the corporate tool of marketing products and services and less the clarion call to the soul that it’s always felt like.

Clearly, the image above depicts the kind of thing that a Cowell-format music show would never let a prospective star get away with – how would that kind of wanton aggression and wilful property damage play in an era of David Cameron values, tabloid hysteria and razor-thin profit margins?  About as well as Justin Bieber at a Five Finger Death Punch show.

I’ve heard the argument that rock is dead since I was a teenager and yet it’s never quite shuddered to a halt and expired – seemingly every so often, a band like Nirvana, Deftones or Muse comes along and rudely drives a vintage Fender guitar right through your heart and makes you see the world from a distinct and undeniable perspective.  I don’t see that changing, but the scale to which a band like that can break through seems to have changed.

There’s always a sense that rock should be the transgressive, unpopular, wholly disreputable older brother to the eager-to-please, squeaky clean younger sibling of pop (which makes Country your oft-divorced, beer and line-dance afficianado Uncle, I guess?), so the notion that it can’t get arrested on American radio and that the kids prefer Kanye’s glossy capitalist hip-hop narrative isn’t exactly a surprise.

When you were young, did you want to listen to your parents music?  Yeah, me either.  If I had to call it – and bloggers tend to feel that they have to – I’d say that rock isn’t dead – It’s just enjoying a disgraceful long afternoon in the sun and trying hard to ignore the bratty, currently popular kids who remind them of former glory. 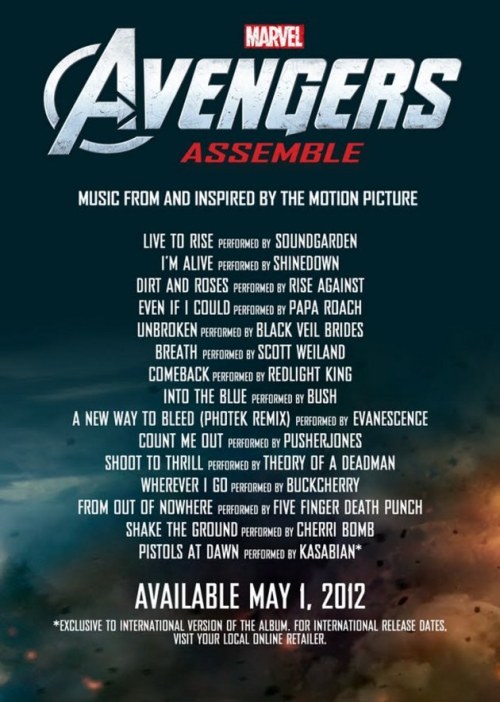 Music to be Tony Stark by...

So, you were expecting Selena Gomez, perhaps?

In a move which boldly pitches their soundtrack album firmly at middle-aged rockers, the clever folk at Marvel have decided that this summer’s “Avengers” movie will benefit strongly from a soundtrack composed largely of the musical genre known as ‘Butt Rock’.

Is this really Joss Whedon’s taste in music?  Because, if it is, I’ve just extended my man-crush on him to an absurd degree.

The big news in the soundtrack listing is the first new material from the reunited Soundgarden , “Live to Rise”, which you can hear a brief sample of here.   Riff which might take your face off? Check.  Bass for your face?  Check.  Popular kind of flannel shirt? Check.

Mild snark notwithstanding, I am all over this soundtrack like a slavering fanboy who just realised that there’s less than a month to go before he gets to go and see “Avengers Assemble” with Mrs Rolling Eyeballs.  It’s quite possible that this track listing is not your kettle of salmon, but I’m almost predestined on a genetic level to like this stuff – crunchy loudness makes Fluffrick happy!

Festival organizer Andy Copping has announced another complement of bands in the summer festival arms race – Download 2012 will see sets from the reformed Soundgarden, Tenacious D, Chase and Status, You Me At Six and Biffy Clyro.

You Me At Six - the phrase 'Cheeky Chappies' comes to mind...

I’d keep an eye on the Download forum for more announcements – or listen to Dan Carter’s Rock Show on the UK Radio One tonight, where he’ll be announcing another nine bands.  And, yes, I did just advocate listening to Radio One.  Clearly, the world has gone topsy-turvy…

Any chance of some spectacularly unfashionable European Symphonic Metal, chaps?  Or is that a bit more Bloodstock?

Tagged as Biffy Clyro, Chase and Status, Download 2012, Soundgarden, Tenacious D, You Me At Six