The Becks, as Death Dealing Vamp Selene, in "Underworld: Awakening".

Geek film critic Harry Knowles, of Ain’t It Cool News fame, has always been a proponent of giving his film reviews a wider context .  He wants to give you a sense of what the screening was like, how the audience behaved and a picture of how the surroundings of the film enhanced or detracted from his experience.

I would do that myself, but I’m not sure that you need to know how about my inhaler falling out of my pocket and getting stuck under the car in the cinema car park, or the van full of kids who were THIS EXCITED ABOUT GOING TO PLAY LASERTAG, LOLZ!

The normal-sized pair of 3D glasses is what I usually take with me when going to the cinema to see a 3D movie.   I forgot them when I set out to see “Underworld: Awakening” today and so ended up using the top, kids-sized pair of indoor, knock-off Raybans when it was handed to me – I’m 6 feet 3 tall and have unruly long hair – those glasses were lucky to stay perched on the bridge of my nose without exploding.

I’m assuming shenanigans on the part of the Emo-haired, apparently eleven year old cashier at Cineworld – however, his cunning (or inept) ruse did not prevent me from enjoying this latest salvo in the eternal war between vampires and werewolves, but did confirm that 3D doesn’t really add much to the experience.

SPOILERS, probably, from this point forward.

Kate Beckinsale’s eternal vampire warrior Selene – ‘death dealer’ in the ornate parlance of this franchise – has been frozen, experimented on and generally kept under lock and key for twelve years when we first meet her.   In flashback, we see that the wider world has finally gotten hip to the supernatural war being waged in the shadows – you would think that governmental types might have noticed ten feet tall werewolves running amok and be-winged ancient vampires attacking all and sundry as a minor blight on urban living – and instigated a cataclysmic purge.

Hence Selene’s on lock-down, her vamp/wolf hybrid love Michael is missing presumed dead and the supernaturals who swaggered through the previous films like they owned the joint have gone to ground.

To make matters worse, Selene’s having weird psychic flashes which link her to person(s) unknown and the Med-Tech group who were experimenting on her are quite keen on getting her up and flash-burning her into oblivion.  It’s not the best of days for anyone and it’s made a bit worse when Selene finds out that she now has a daughter, Eve (series newcomer India Eisley).

If you saw the picture of Eisley and thought to yourself, “Franchise spin-off, ahoy!”, then we’re on the same page.  It’s not hard to see that this iteration of  “Underworld” acting as something of a soft reboot for the series, with the likes of Eisley and Brit heart-throb-in-waiting Theo James filling a nice Beckinsale and Scott Speedman-sized space should the producers decide that they want to skew the series younger and attract some of the tweens and teens who’ve flocked to the “Twilight” films.

This said, all concerned may want to make some changes before that sort of plan is considered – I’m not remotely a champion of censoring films, but the level of violence in this sequel did make me wince a couple of times.  This is one film which absolutely earns its 18/R rating, so be fully warned if you’re not a fan of gore, blood and heads exploding.  It makes the last “Rambo” look like a Miley Cyrus vehicle.

As I’ve said, I did enjoy the film but had some reservations about some choices which were made.  The utterly convoluted but entertaining back story of the previous entries in the franchise is more or less forgotten in favour of covering events in the here and now.  Eve is the focus of this movie and the wholesale devastation of the Vampire and Were populace is dealt with in a quick-fire introductory sequence.

The cynic in me suggests that the introduction of new characters might be a studio’s favoured way of moving forward with the franchise and recasting younger, (subjectively) hotter and – most importantly – cheaper actors who aren’t married to the producer/writer/director.

Still, Eisley is actually quite good and Theo James acquits himself well, too, so the idea of seeing another “Underworld” sequel in two years with these two front and centre doesn’t fill me with the same level of horror that it might do for the mainstream critics (it looks like this film is going to have a pretty decent launch this weekend – number one at the US box office with $23-24 million and nobody has a good word to say about it.  Almost guarantees that there will be another film…).

To sum up – Kate’s great, the gore in this picture is mind-boggling, the 3D is okay, the climactic battle is a gonzo Battle Royale and it occurs to me that my favourite guilty pleasure horror action franchise is turning into a Vampire-centric “X-Men”/superhero clone  – and I’m absolutely okay with that.

Just don’t do a “Twilight”  number on the next one, eh, Screen Gems?

“Resident Evil: Retribution” gets a teaser trailer…Now with screencaps!

We’re not bothered by review embargoes, lousy reviews or any of that stuff.  We want genre, we want it made by reasonably competent film makers and, if possible, headlined by actresses who look barely capable of picking up their dry cleaning without an entourage in tow, let alone in kicking the snot out of zombies, were-beasts and toothsome Euro Trash.

No, you're not imagining things. This is how the trailer begins.

Beginning with the most absurd piece of product placement since the last Bond movie, the trailer for Paul W.S. Anderson’s latest has nearly thirty seconds of smiling, pretty people speaking to camera for some kind of infomercial, each one of them happily  brandishing some piece of Sony home electronics consumer tech which defines their oh-so-photogenic lifestyles. 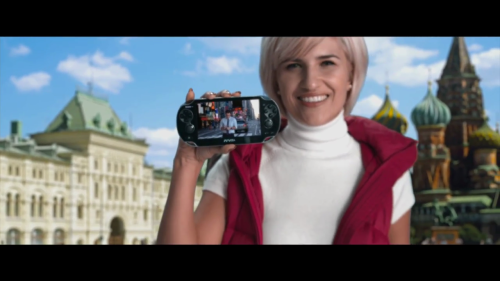 Look, a PS Vita! What does this have to do with "Resi", again?

How very nice and synergistic.

That'll be Ada Wong's introduction into the films, then.

This surreal advertorial abruptly shifts into a scene of utterly razor-toothed mayhem, as Milla Jovovich pops up on top of a besieged White House, and a sizzle reel ensues.  Massive mutant creatures chasing a vehicle,  a fleet of armed heli-gunships, surprise returning characters, new global locations and lots of the utterly insane action which has become this series’ defining characteristic. 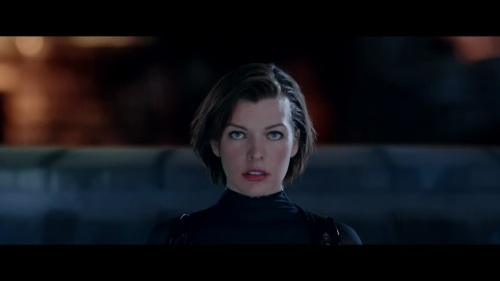 My name's Alice. And I remember everything. Or nothing. Possibly some Kung Fu.

Physics?  Plausibility? A pox on ye! 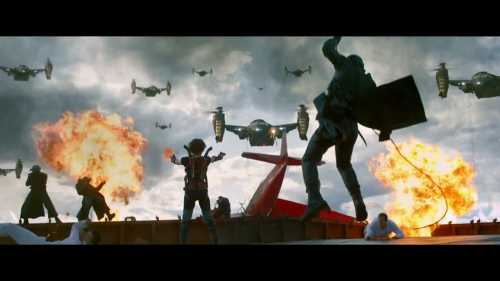 And then EVERYTHING exploded...

There’s some kind of correlation to be drawn between the reviews for these movies – try to find a critic who likes them – and their ever-increasing success at the global box office.  Like the similarly critically reviled “Fast and Furious” movies, the opinions of the critical establishment have no bearing on the audience paying their money to go to see each film, as each film makes a ton of money and begets another sequel in another two years or so, in some strange parody of the way that the movie business is supposed to work. 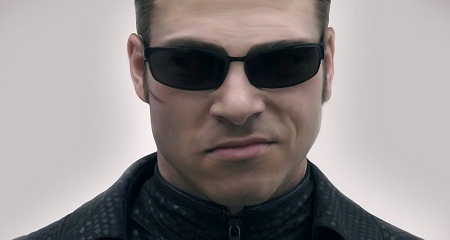 Mr Wesker respects your critical view of his film. Please now allow his Zombie Rotweillers to eat you. Have a nice day.

A movie series based on a video game sequence acting as an agent of unpredictable agitation in a staid entertainment sector and making up new rules on the fly?  Stranger things have happened.

“Underworld: Awakening” is for adults, apparently.

Well, this is a turn-up for the books.

The BBFC – Britain’s film classification organization, who are like a more accountable MPAA  – have a very useful website which gives consumers information about classification decisions (along with some very useful release date information) and it’s only gone and told me that “Underworld: Awakening” has been passed uncut in the UK with an 18 rating.

It contains ‘strong, bloody violence and horror’, apparently.  If I were a kid today, I’d love a site like this – it would make my film watching choices so much easier, particularly when using the BBFC’s informative and only slightly hilarious Extended Content Information notes, which perhaps work in a fashion different to their intent.  If you want to know what films you SHOULD be watching for sex, violence and the like, the ECI notes are your very best friends on the internet.

I’m sure that the good people at Sony and Screen Gems might have preferred a slightly more inclusive rating which didn’t bar tweens and teens from seeing the flick but I have to quietly voice a sigh of calm relief – the ratio of ‘kids ignoring the film and texting their friends’ to ‘nerds who, you know, want to watch the film‘ is going to be that much more biased in my favour.

Hurray for censorship (or not, in this case)!

For those of you who want some more clips and Vamps-vs-Lycans shenanigans, you can check out five clips and some new images at Beyond Hollywood’s preview page.